!! We gather on the Münsterplatz instead of the Barfüsserplatz !!

Against the poisoning of the world

Procession through the city starts at 14:30

Apart from the global Covid pandemic, CO2 emissions have continued to increase in the last two years, not least as a result of industrial capitalist agriculture. Syngenta and Bayer produce pesticides and (GM) seeds for the world trade. In doing so, they enable the cultivation of maize, soy, and palm oil monocultures that contribute to the deforestation of rainforests and thus to the climate crisis. These monocultures hardly contribute anything to the nutrition of the people in the Global South and primarily serve meat production and the profits of the agro-multinationals.

Climate change is a global challenge. A great diversity of species, local seed-resistant varieties and freely accessible seeds are the best foundations of an adaptable agro-ecosystem. However, the use of pesticides, as well as agrogenetic engineering and patents, is destroying this through capitalist, industrial agriculture and thus threatening global food security.

The global biodiversity crisis is also steadily increasing. The mass of flying insects alone has declined by more than 75% in the last three decades. Syngenta and Bayer are destroying the biodiversity of rivers and the drinking water of millions of people with their pesticides, and are among the main causes of bee mortality, not to mention endangering the health and lives of farm workers. Syngenta’s poisons “atrazine”, “thiamethoxam” and “paraquat” are not allowed in Switzerland and the EU, but are still sold worldwide.

LET’S BREAK THE POWER OF THE AGRO-MULTINATIONALS!

Internal papers of the lobbyist organisation CropLife show how agribusinesses prevented the entry law of a new bill that would have reduced pesticide use in the EU last year. The corporations are now trying to use the threat of crop losses from the Ukraine war as an argument for relaxing environmental laws. Yet there are much more obvious measures, such as reducing the consumption of animal products.

With Syngenta, Bayer, and BASF, three of the largest and most destructive agribusiness corporations are present in our city. Yet Basel voted 57% in favour of the popular initiative for a Switzerland without synthetic pesticides on 13 June 2021. This is why we declare, “Atrazine and paraquat, we are fed up with your poisons!”

Hold your head high and get involved in the March 2022 against Bayer, Syngenta and Co. manifestation and beyond. Resistance is a duty!

*Our demo wants to convey an image of diversity, creativity and openness. We strongly oppose any homophobic, nationalistic, racist or other reactionary ideologies and appropriation!

Procession through the city starts at 14:30

Exploitation, pesticide pollution or climate crisis – there are many reasons to take to the streets for a fair and ecological agriculture!

Bayer, Syngenta & Co. represent an agricultural system that destroys biodiversity, erodes soils, poisons groundwater and devours vast amounts of fossil fuel. According to a report for the UN, pesticides kill 200,000 people per year. While the main victims of these corporations’ practices live in the countries of the global South, the profits flow to the North, including Basel, where Syngenta is headquartered and where Bayer and BASF also have subsidiaries.

On April 17, on the international day of peasants’s struggle, the March against Bayer & Syngenta will take the form of a scavenger hunt. There will be various posts or booths throughout the city that can be visited in small groups.

There you can educate yourself about the critique on Syngenta, craft demo gear for next year or get active with a small, creative action against Syngenta and the capitalistic industrial agriculture.

If you need or want more thorough protection from Corona, you can of course be part of the protest without coming on-site. You can support us online like last year on April 17th.

At 12:30 in front of Syngenta on Rosentalstrasse there will be an initial manifestation (please don’t forget masks and distance) and at 16:30 a closing manifestation with some speeches on Theaterplatz. Permission for the whole event has been granted.

Hold your head high and get involved in the March 2022 against Bayer, Syngenta and Co. manifestation and beyond.

Posts and booths with information or online activities. You can find them here (German).

WebAgainstSyngenta – How to March against Syngenta online

The preparations were in full swing, flyers were already printed and posters were painted for the 6th March against Bayer & Syngenta here in Basel. We were ready to take our criticism of an inhuman and environmentally harmful agricultural model back to the streets and to call for a climate-friendly world food supply.

But then the Covid19 pandemic came and out of solidarity to all, we do not want to call for a demonstration or for actions by small groups. But our resistance and our demands remain as important and necessary as before. As long as the employees of Syngenta and Co. continue to work, the resistance against the agro-multinationals will continue. And for that we need you!

We have compiled a demo tutorial here, to ensure that our criticism does not miss its effect and that our demands become visible all together. It does not matter if you are a professional hacker, an agrobusiness influencer, or if you have no idea about computers– you can march along and it needs you and your creativity!

On April 25 from 2pm to 4pm (UTC +2), we will let Syngenta, Bayer & Co. hear our message on all of their public platforms. Whether as a rating of their apps in the App Store, as a comment in front of their headquarters on Google Maps, as a Facebook post or old school by letter – everyone can participate. We also welcome offline participation with photos of you or children’s drawings of the youngest marchers sent to us in advance. Show us what you criticize about Syngenta & Co. or what kind of agriculture you demand. Together we will bring the power of 2000 demonstrators together at #WebAgainstSyngenta!

Instructions to join in:

Profile: My computer is a mistery

Of course, you can also post your criticism on channels or platforms that are not listed above. Further, it has already come to our attention that besides Syngenta and Bayer, there are also more agro-industrial corporations which use the industrial agriculture to fuel biodiversity loss, human rights violations and the climate crisis, threaten global food security and stand in the way to a sustainable, agro-ecological future…

So take your responsibility and get involved in the first digital March 2020 against Bayer, Syngenta and Co. Let’s stand together for a fair and ecological agriculture!

If you have a question or need help, you can reach us by mail or by direct message on our social media channels.

The action consensus is a binding framework for the March against Bayer & Syngenta online action.

The consensus on action is the prerequisite for bringing our protest to the public so that our criticism and our wishes are addressed appropriately and will be heard by the people, companies and institutions.

All those who agree with this consensus are invited to take part. On April 25, 2020, we want to be a mass of people who call out and criticize the exploitative, destructive behaviour of the actors of capitalist industrial agriculture. This will happen through campaigns in virtual space.

With this, we aim to send a signal against a system that drives people (further) into dependency, poisons the environment and people, causes biodiversity loss and is one of the decisive causes of global warming and its dramatic consequences.

Our form of action is an openly announced online campaign with a wide range of participation possibilities.

Our rally wants to convey an image of diversity, creativity, and openness. Our actions are not directed against employees of the criticized companies, but against the corporations and the entire capitalistic agricultural system with all its consequences. We want to clearly distinguish ourselves from comments by “angry citizens” and therefore refrain from verbal violence (the Internet never forgets!). We have a clear criticism and can objectively justify it.

Our message must be truthful, understandable, and personal. The truth is essential in this age of fake news. We focus on the facts. On our website, you can find a small collection of material that can be used for the online campaign (the facts are bad enough, there is no need to lie about them).

We are aware that we can be identified by our IP addresses. Whenever possible, we use a VPN and/or the Tor browser to surf the web. Whenever possible, we communicate through encrypted channels and keep sensitive information, such as passwords, to ourselves. We ask ourselves whether we want to comment, post and write anonymously or whether we want to use personal accounts and profiles with our own personal reach.

We firmly oppose homophobic, nationalistic, racist or other reactionary attitudes and attempts to misuse this platform for such purposes.

We are in solidarity with all those who resist the destruction of our planet and its social and ecological consequences.

– Open letter –
to the government of the Canton of Basel-Stadt and the parties in the Grand Council
Not in our name, Basel!

By ousting the demonstrations against Syngenta from the city centre, Basel is actively protecting the harmful agrochemical industry.  In this open letter we express our indignation and urge the Basel government to shoulder its responsibility for the role played by Basel-based corporations in the world.  Basel lives at the expense of others and ignores the associated global exploitation and human rights violations.  The Syngenta business model, which contributes to the over-exploitation of human, animal and natural resources worldwide, is a particularly good example of this imperial way of life.

The canton of Basel-Stadt decided to banish the broad-based “March against Monsanto and Syngenta” from the city centre.  The March is supported by about 60 organizations and parties and mobilizes thousands of people each year (www.marchagainstsyngenta.ch). This submissive decision is, however, just another classic example of a masterly achievement of profiteer Basel in the global system:  the total marginalization of the global consequences of our corporations’ business models and our way of life.

Not in our name, Basel! – Full PDFDownload

The Swiss NGO alliance MultiWatch has collected a lot of information about the agrochemical multinational Syngenta. The English translation of “March against Syngenta. Revealing Monsanto’s Twin from Switzerland” is now available as an eBook by the Swiss edition-8 in Amazon Kindle Store and other digital bookstores.

More information can be found here. 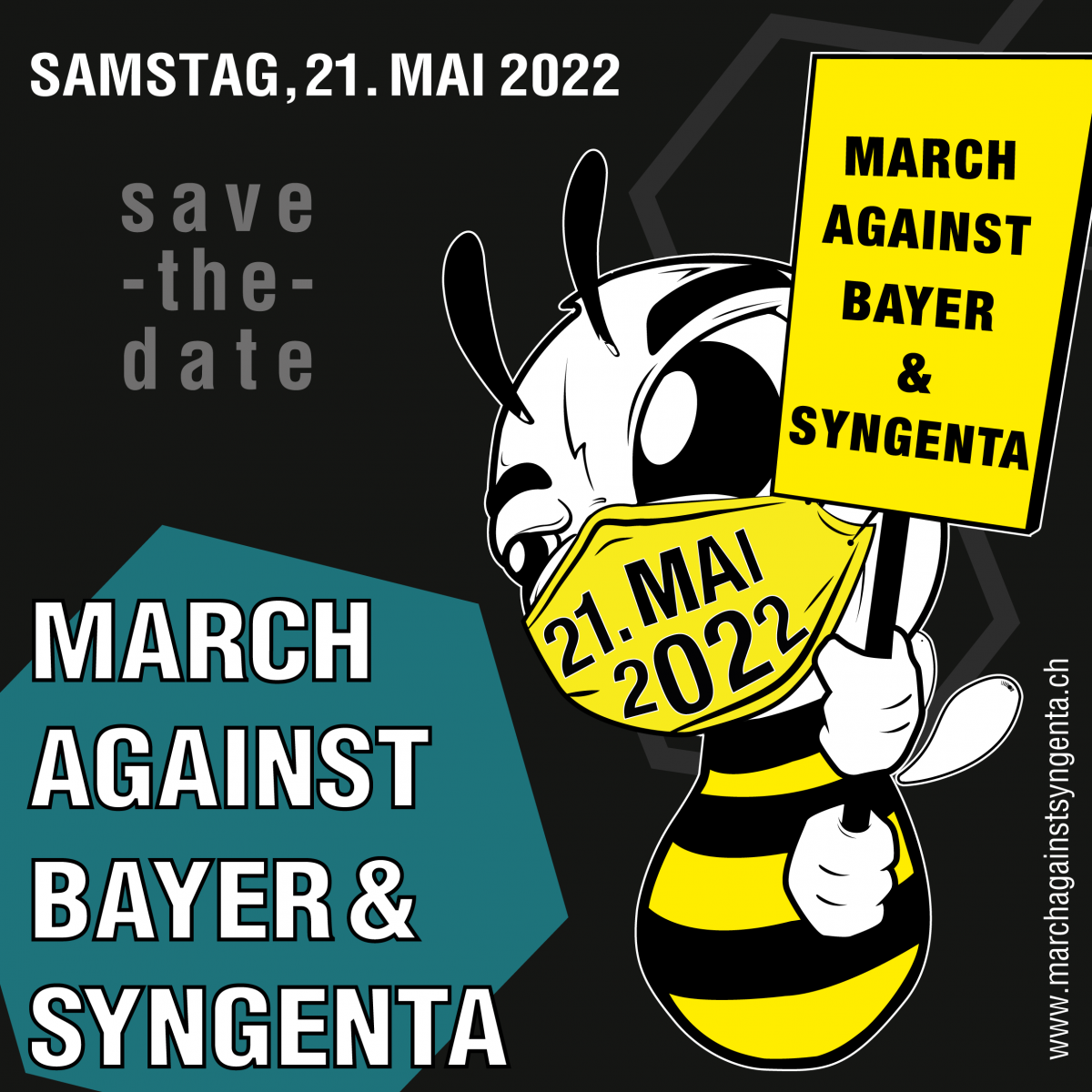 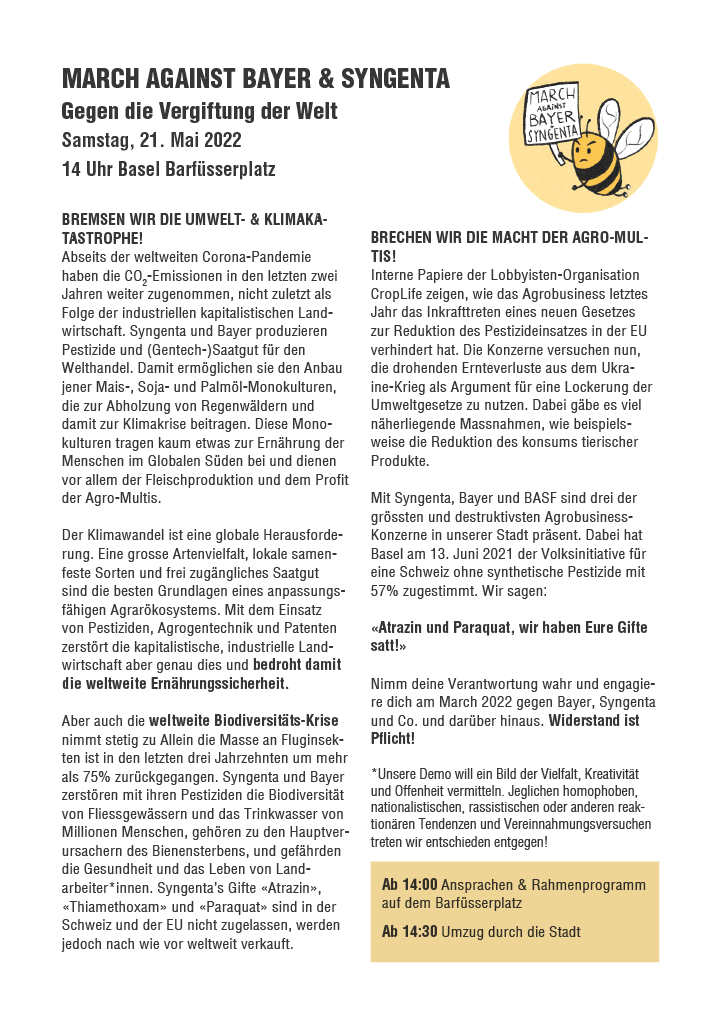 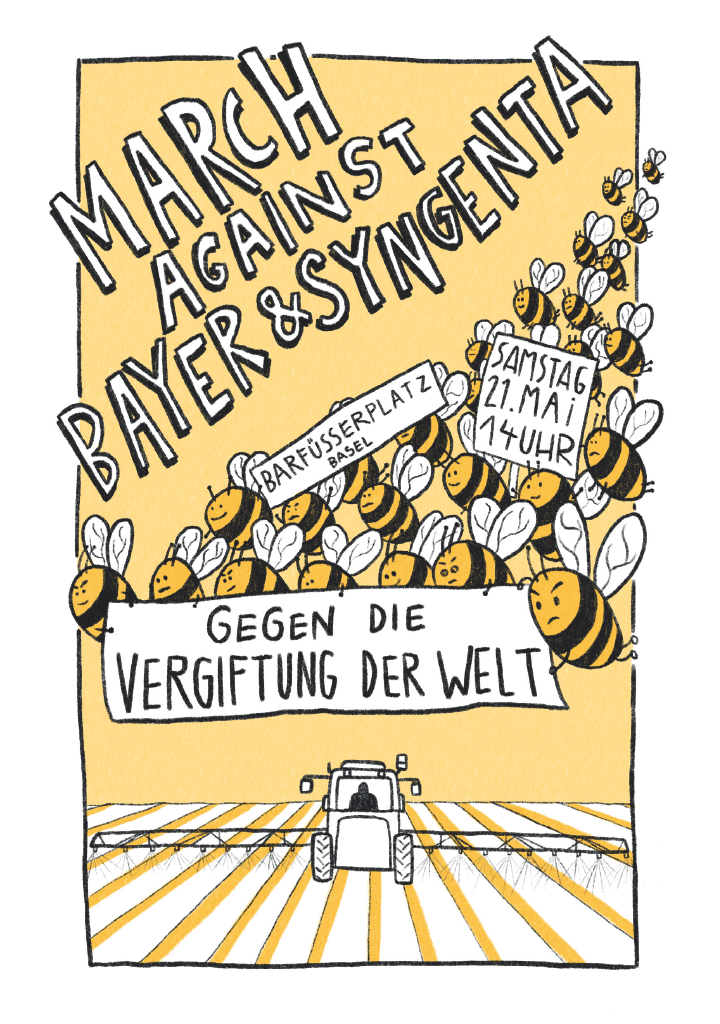 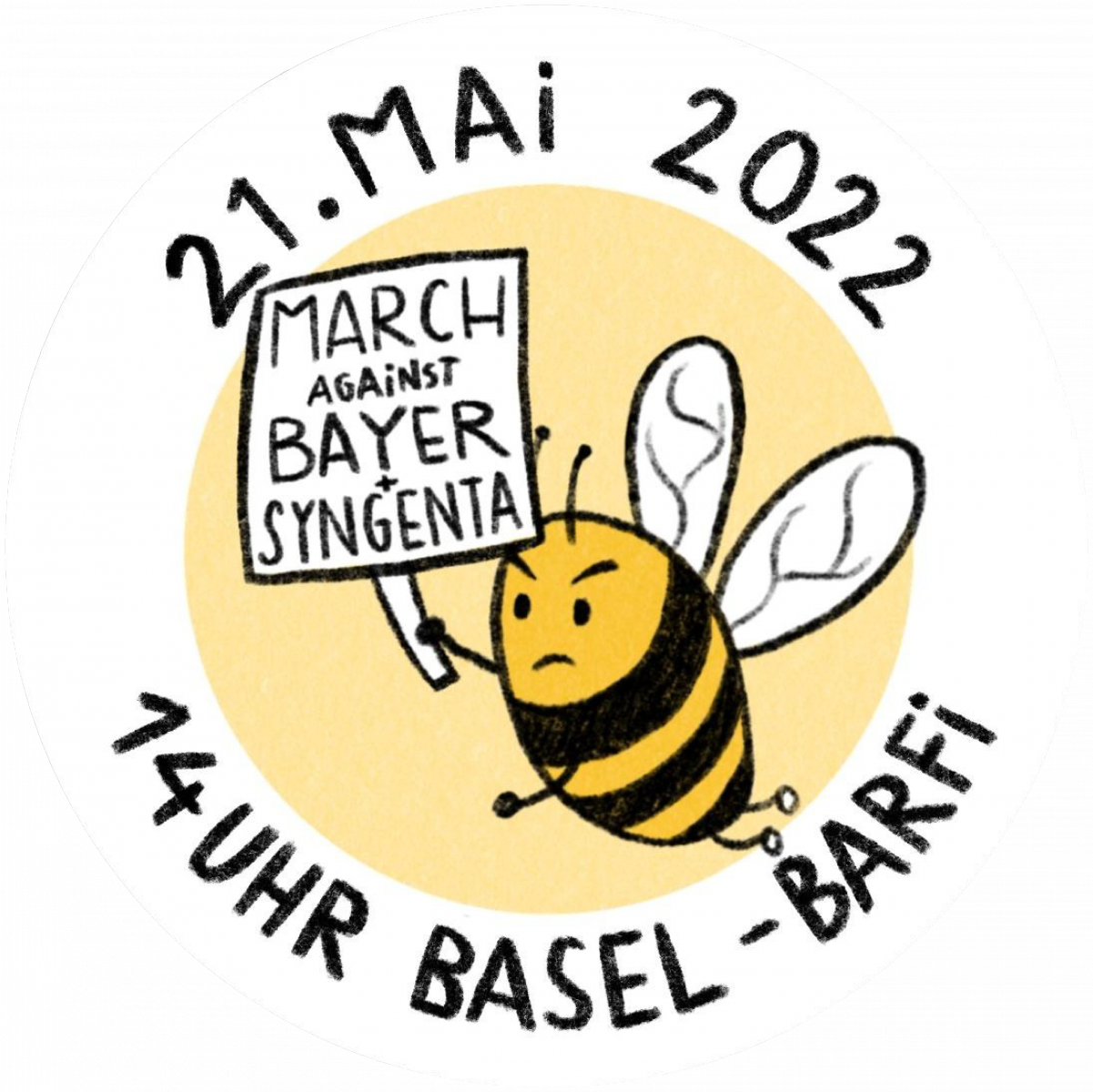 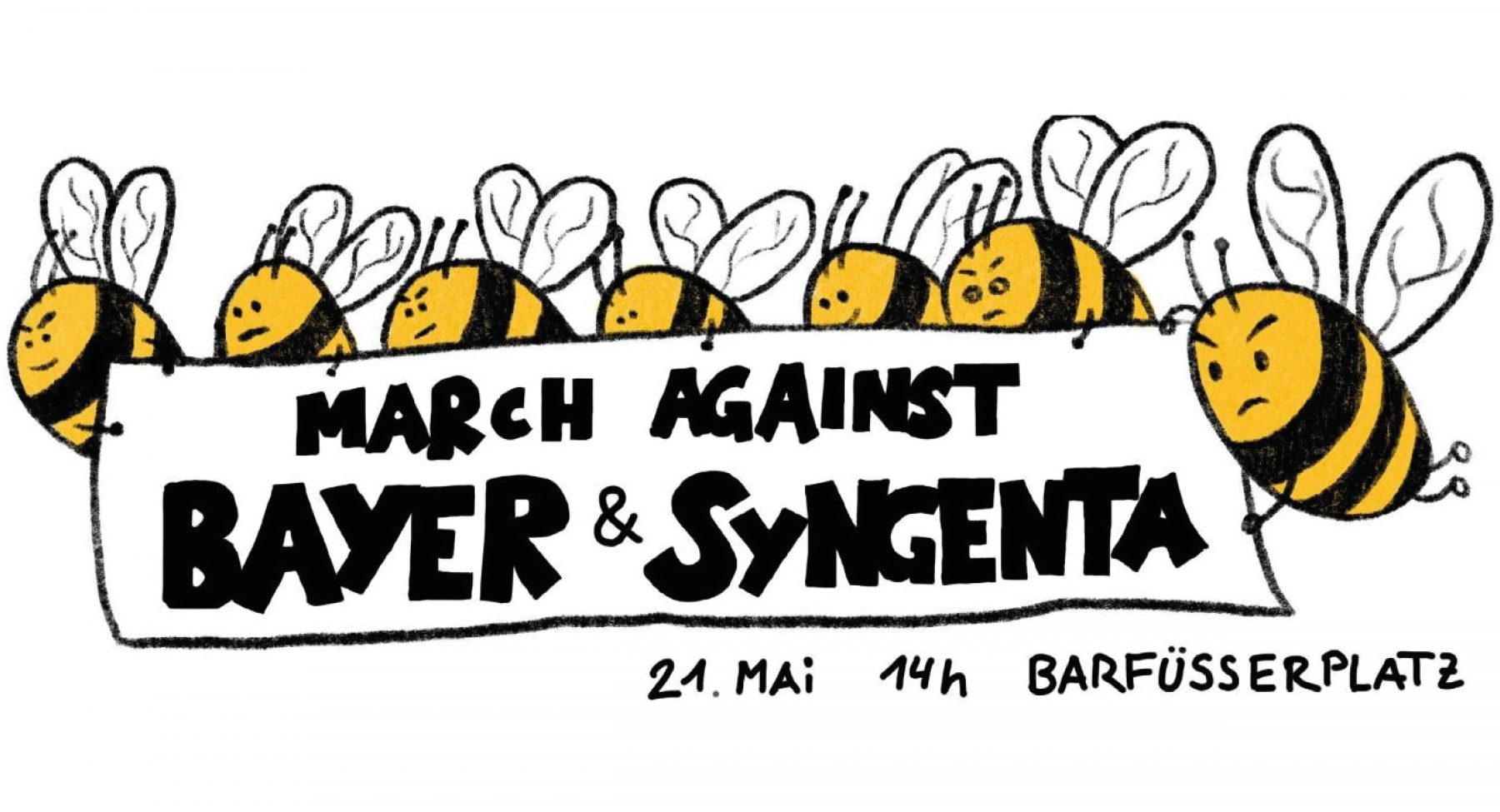 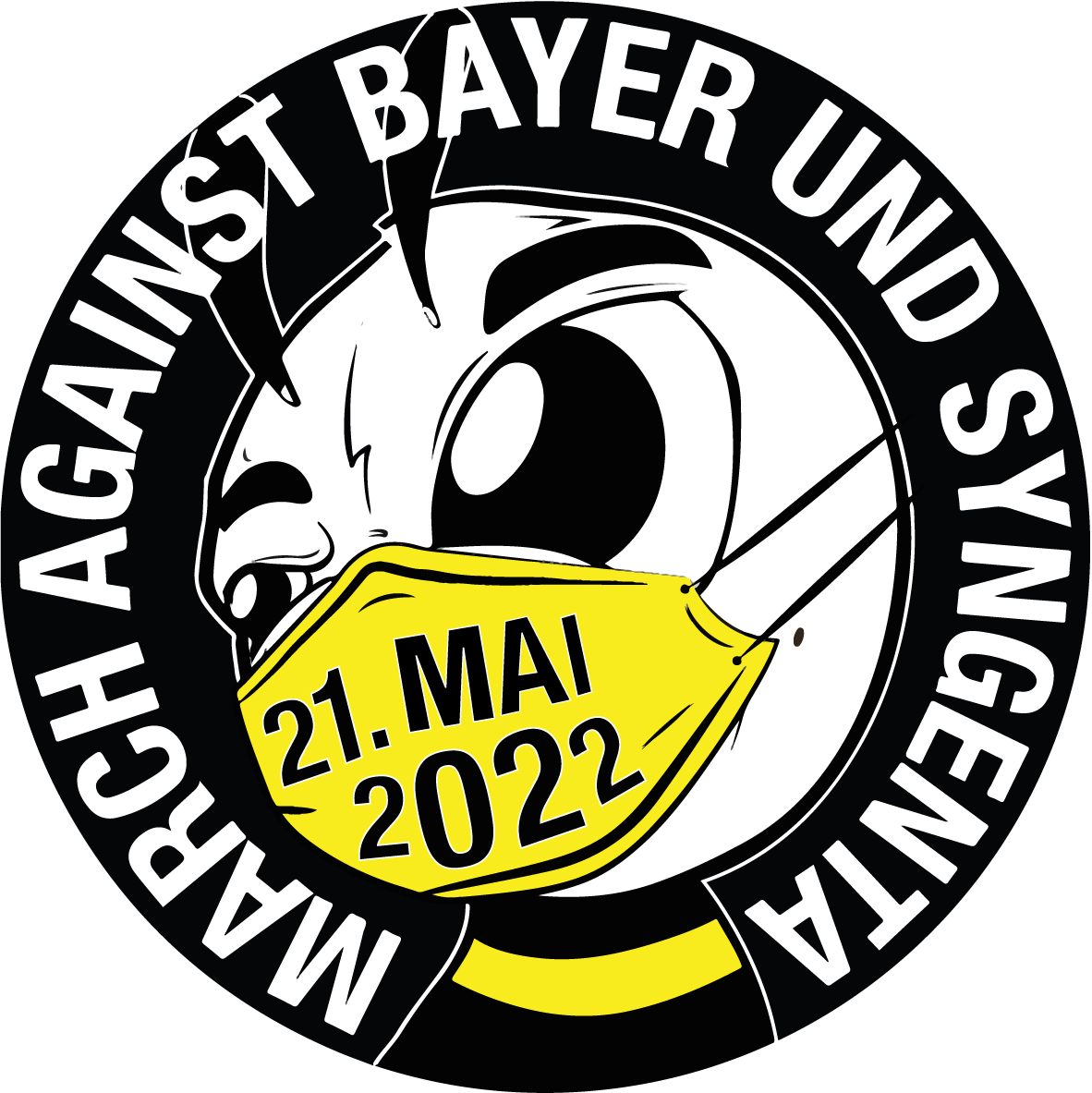